My Journey to Activism

I never paid attention to local politics—or national politics for that matter. I knew the basics: The president, which countries we were mad at, which were mad at us, the price of gas, and when to file my taxes. It was enough. I was content. Then an ex-boyfriend posted nude pictures of me on the Internet without my consent. Certain he had committed a crime, I went straight to the police.

But the law enforcement officials I turned to for help only smirked, shrugged their shoulders, and sent me on my way. Except for one State Trooper who sadly explained the ways in which the Maryland laws prevented him from doing his job, and thus prevented him from helping me. “Then, I’ll change the laws.” I said. “Annmarie,” He replied, “If you do that, it’ll make my job a lot easier.” And so it began, my foray into politics, legislation, bill drafting and testifying. But first, a visit to YouTube was in order. All those years of not paying attention had left a rather large hole in my knowledge base. I couldn’t remember the legislative steps. I didn’t know where to start. I couldn’t remember the differences between House and Senate, legislature and congress.

So I turned to the one resource that would set me on my path: School House Rock. Rosa Parks spent years readying herself for the groundbreaking civil action she performed that forever changed a turbulent moment in history. She aligned herself with the NAACP, received training in activism in worker’s rights and racial equality, and launched what was called the strongest campaign for equal justice seen in a decade.  I readied myself by watching a cartoon from the 1970’s. Once I finished my refresher, I began what I considered the most difficult part of the process. I reached out to legislators with my story. I could barely talk about what happened with my friends and family without cringing with the shame that accompanies a crime of a sexual nature.

In order to see the laws changed, I shared my story with strangers who may or may not care about my suffering. I made myself vulnerable. Since crimes of a sexual nature bring about very mixed reactions, I wanted the legislators to regard the photos as a piece of trust and intimacy that was used in a way completely opposite of its intended use: to hurt, to terrorize, to induce powerlessness, to destroy. My pictures were posted in 2010. At that time, the term Revenge Porn hadn’t yet been coined. Internet searches about nude pictures being posted returned results about online stalking and harassment. I opened the emails I would send to lawmakers with the sentence, “I am a victim of cyber harassment and stalking.” Then I briefly explained what happened avoiding that the harassment included nude pictures being posted. I was still feeling shame and couldn’t bring myself to reveal the true nature of the crime. Within a week of sending my first email, I had a meeting with US Senator Mikulski’s legislative aid. I discussed what happened and the need for legislation. I presented examples of statutes and lots of statistics. I learned a lot and walked away feeling ready to approach senators in Maryland. A few weeks later Senator Brochin called in response to the email I sent him. He invited me to help draft a bill to strengthen Maryland’s online stalking and harassment laws and asked me if I would testify in support of the bill. On February 2, 2011, I testified before the

We are advocates, activists and legal researchers. I still face some of the fears I did the day I first brought my case to law enforcement, but I have embraced my role as the voice for those who have not yet found their voices. And I will speak out.

A Life Taken too Soon: the Story of Amanda Todd

“I’m struggling to stay in this world, because everything just touches me so deeply. I’m not doing this for attention. I’m doing this to be an inspiration and to show that I can be strong. I did things to myself to make pain go away, because I’d rather hurt myself then someone else. Haters are haters but please don’t hate, although im sure I’ll get them.
I hope I can show you guys that everyone has a story, and everyones future will be bright one day, you just gotta pull through.
I’m still here aren’t I?” -Amanda Todd, September 7, 2012

Imagine feeling alone, betrayed and constantly afraid. This was an everyday occurrence for Amanda Todd.

In 7th grade, after meeting new people online who told her how beautiful she was, she made the mistake of giving in to someone’s repeated requests for a topless photo of herself. That one photo haunted her from school to school, from city to city, and online. Amanda found out the way I did that sharing pictures online means that they are up there forever. She was teased, bullied, threatened, and even beaten up by the people she had to face everyday.

More than anything, she was alone. Alone with her fears and haunting thoughts. Amanda experimented with drugs and alcohol to ease her pain. She turned to physical pain, cutting herself when the bullying worsened and her depression escalated. When a girl punched her in front of the whole school, ridiculing her, telling her that nobody cared about her, she went home and drank bleach in an attempt to end her own suffering. She was saved at the hospital, but her tormenters spared no opportunity to ridicule her for it.

I chose to blog today about Amanda because today marks the one-year anniversary of her death. And today we get to celebrate the life of a beautiful young girl that we lost all too soon. If there is one thing you take away from her tragic story, please remember that your words are powerful and sometimes we can underestimate how much they mean. Treat the people around you with respect.

Nobody deserves what Amanda went through. I wish I had known her. I wish I had one day with her to help her and to let her know that she wasn’t alone. I wish I could tell her that she’s my hero and that she is the reason that I’ve stayed strong and kept fighting for justice.

Though we can’t bring her back to life, I choose to remember her…rest in peace, Amanda.

“Be the change you wish to see in the world.” –Mahatma Gandhi

It is even more exciting to hear those sentiments coming from lawmakers like Assemblyman Edward C. Braunstein, who stated, “Disseminating sexual explicit images that were shared with an expectation of privacy can cause lasting damage to victims and should be a crime.”

“This so-called phenomena of ‘cyber-revenge,’ is a tawdry form of exploitation. From what we know, the majority of its victims are women who don’t know that their images and likenesses [have] been bartered and sold over the Internet,” said Sen. Griffo. “Currently, these victims have limited options when their pictures taken with their consent, were posted online.”

Show your support for this law and help change the public discourse by participating in the discussion on Twitter and Facebook.

A Story to Tell

The worst part about this situation is being called a slut by people who know me, seeing comments on different sites saying “she’s playing the victim” or “she asked for it by sending the pictures”. Had I been smarter at the time, maybe I would have sent those pictures without my face in them, or maybe I wouldn’t have sent them at all. But I can tell you exactly what I was thinking at the time. I thought about how much I trusted him, how much I cared and loved him, and that I was almost certain I would marry him someday. After ten years of knowing someone, why wouldn’t I trust him?

Call me every name in the book. I will be the first to admit that I made a mistake by trusting a disgusting, hideous, betraying monster, but what he did after I hit send…that was all on him. He chose the path he now has to live with. He deserves everything the justice system gives him. He violated me every day for almost two years. He sent people to find me in my own home.  He made me fearful every day of my life! I became someone who is now constantly looking over her shoulder and checking her rear view mirror to make sure nobody is following her. His actions changed me completely.

The lesson I learned is that not every person is good and not every person is brought up with the same morals. I’ve learned that I shouldn’t trust everyone, but I also refuse to let this turn me into someone who closes off to the world. I’ve decided to take my negativity and turn it into something positive. I decided to tell my story, regardless of the criticism I may receive, with the hope that I will change one person’s life, and if I can do that then I’ve done my job. 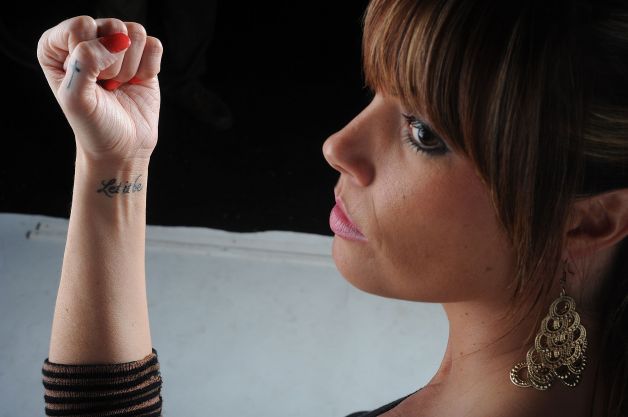 YOU ARE NOT ALONE!

YOU HAVE A VOICE!

You soon become desperate, and are willing to do ANYTHING to have your pictures removed and to feel relief.  You just want it to GO AWAY!  These spineless, predatory cowards lurking in the shadows behind involuntary porn websites know that you will get desperate enough to do anything they tell you.  They offer you relief in return for your payment, or they claim they will remove pictures if you publish your “story” on their site.  They come up with all sort of ways to “help” you.  In reality, nothing they say they are willing to do is to help you, but rather help them.  You’ve already been exploited!  Don’t let them further humiliate you, and use you to their advantage.  Stand up for yourself, take a stand against them and let them know they will not win.  Don’t tell THEM your story; tell a lawyer, tell an investigator, tell Bullyville, tell the public!  Expose them the way they’ve exposed you, and in turn hold them accountable for their actions!  There ARE good people out there willing to help you!  There ARE options!  They can only get away with what we allow them to.  You are the only one who can take away their power, by taking a STAND!