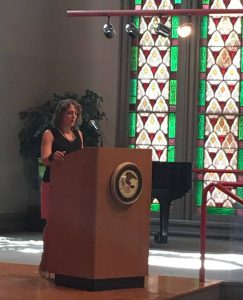 In particular, Chemerinsky voiced his unequivocal support for the Intimate Privacy Protection Act (IPPA), sponsored in 2016 by Congresswoman Jackie Speier (D-CA) and drafted in collaboration with CCRI. *Update: The bill was re-introduced on November 28, 2017 as the Ending Nonconsensual Online User Graphic Harassment Act of 2017 (ENOUGH Act).* Though a number of states already have laws against nonconsensual pornography, Chemerinsky explained, “The state statutes are too weak. There really needs to be a federal statute here.”

Chemerinsky also referenced the need to amend Section 230 of the Communication Decency Act, which, in its current form, poses challenges in forcing internet providers to remove sexually explicit images disseminated without consent.

To learn more about and support CCRI’s work to end nonconsensual pornography, visit us here.

This section is widgetized. To add widgets here, go to the Widgets panel in your WordPress admin, and add the widgets you would like to the Right Sidebar.

*This message will be overwritten after widgets have been added.